A sultry, mesmerizing romp at The Modern Theater Spokane 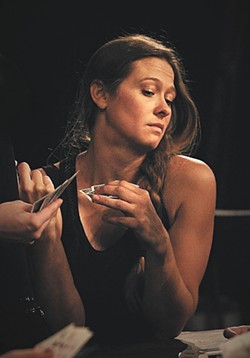 Sarah Miller plays Mona in the Modern's production of Chicago.

When Morrissey stepped into the guise of a fame-hungry, incarcerated narrator

in "The Last of the Famous International Playboys," singing, "In our lifetime, those who kill / The news world hands them stardom," he was directly referencing the Kray twins, Reggie and Ronnie, who racketeered and murdered their way to celebrity status in London's East End during the 1950s and '60s. There's a self-destructive perversity in the idea that society would fête the very sort of behavior that undermines its order, something Morrissey's misguided persona struggles to make sense of: "I never wanted to kill, I am not naturally evil / Such things I do / Just to make myself more attractive to you / Have I failed?"

The Krays certainly weren't the first (or indeed the last) manifestation of the celebrity criminal phenomenon. Less than a decade after the brothers were finally jailed for their crimes, Kander and Ebb's Chicago opened on Broadway to satirize — and to some degree, glamorize — the sensational Jazz Age story of Roxie Hart and Velma Kelly. Hart and Kelly were lightly fictionalized, heavily stylized proxies for Beulah Annan and Belva Gaertner, two women who'd been suspects in headline-grabbing whodunits in the titular city 50 years earlier. Chicago has since become one of the longest-running musicals in Broadway history, which is some indication of how much we enjoy generating unlikely celebrities and then watching that sad, seedy process played back for our reflection and entertainment.

And, oh, how entertaining it can be. The current production of Chicago at The Modern Spokane is a sultry, sarcastic, mesmerizingly dynamic romp that feels more like director Abbey Crawford (All Is Calm, Assassins) and her fine cast have not just staged the show but channeled it into this particular space. Ensemble numbers like "Cell Block Tango" and "We Both Reached for the Gun" are perfectly choreographed (in the case of "Razzle Dazzle," exquisitely so) and energized to make the most of The Modern's thrust layout. Aside from some simple raised platforms that help showcase the characters at various points, set designer Jeremy Whittington has kept much of the action at floor level, heightening the intimacy between performers and audience. If only space permitted, it would've been a welcome visual touch to have the excellent five-person live band integrated into the performance and on display throughout.

As Velma, choreographer Angela Pierson (Rock of Ages, The Little Mermaid) high-steps with a commanding presence into a leading role opposite the formidably charismatic Quinn Vaira (Rock of Ages, Wild Party). Her Roxie looks — and sounds — every inch the self-obsessed nightclub vamp. Andy Meyers cuts a sympathetic figure as Amos without sinking into sad-sack pathos; his "Mr. Cellophane" solo is unusually moving for a character we tend to see in anecdotal glimpses. Look hard enough at any of them and we might even catch a glimpse of ourselves, indiscriminately craving or facilitating stardom.

Finally, I can tell you what the Inlander is really like

Mya Cluff: Where Do I End, and You Begin? @ SFCC Fine Arts Gallery

Over nearly two decades, Morihiko Nakahara has conducted the majority of Holiday Pops concerts — with some being more memorable than others

E.J. Iannelli is a Spokane-based freelance writer, translator, and editor whose byline occasionally appears here in The Inlander. One of his many shortcomings is his inability to think up pithy, off-the-cuff self-descriptions.